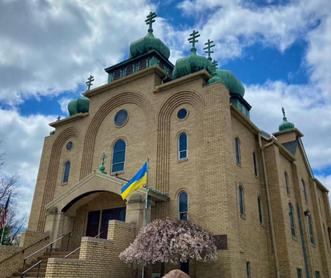 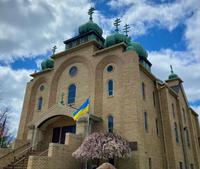 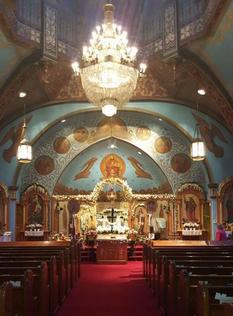 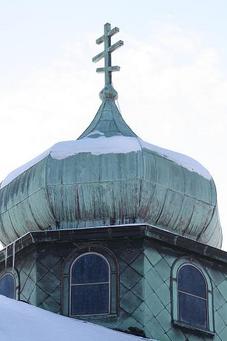 In the winter of 1922 a meeting was held by a small group of Ukrainian families on the west side of Youngstown, Ohio, for the purpose of organizing an Orthodox parish.  The first Divine Liturgies were celebrated in the homes of these faithful immigrants.  In the summer of 1924 the newly-found parish began to function more actively.  Property was purchased on the corner of Russell and N. Belle Vista Ave. for $7,500.  The church was dedicated in 1925.

The original 25 families soon grew into more than 100 and land for a cemetery was purchased for $3,000.  A chapel at the  cemetery was erected in 1927.  The construction of a new church in traditional Ukrainian style began in 1939 and was dedicated on July 14, 1946.  Sts. Peter and Paul, whose feast day is celebrated on July 12, were chosen as the patron saints of the parish.

As membership grew, a religious education program for children began.  Ukrainian language was taught at the Ridna Schola.  In 1946 a pavilion was erected.  The rectory was completed in 1954.  Through the hard work of many dedicated men and women of the parish, our beautiful Orthodox Center was dedicated in 1960.

We are proud of our beautiful parish and rich heritage left to us by our founding members.  We are indebted to them for this great legacy, and we look forward to an even greater future for many generations to come.

The Eastern Orthodox Church is a body of Christians that claims origins extending directly back to Jesus Christ and his Apostles through unbroken Apostolic Succession.  Its doctrines were formalized through a series of church councils, the most authoritative being the Seven Ecumenical Councils held between the 4th and 8th centuries.  These councils were convened out of the necessity to resolve conflicts that had developed concerning beliefs such as Arianism, Nestorianism, and Monothelitism.  Toward the end of its first thousand years of existence, differences developed between the Church in the Eastern and Western Roman Empire that ultimately led to the Great Schism in 1054 AD, dividing Christianity into Western Catholicism  and Eastern Orthodoxy.  Based on numbers of adherents, Eastern Orthodoxy is the second largest Christian communion in the world after the Roman Catholic Church, and the third largest grouping overall after Protestantism.  There are approximately 215 million Eastern Orthodox Christians worldwide.

The present-day influence of the Eastern Orthodox Church encompasses the territories associated with the former Byzantine and Russian empires: Eastern Europe, Asia and parts of the Middle East and Africa.  Today, although Eastern Orthodoxy's strongest influence can be seen in Greece, Cyprus, Russia, Ukraine, Belarus, Romania, Bulgaria, Serbia and Montenegro , the Republic of Macedonia, Bosnia and Herzegovina and Georgia, the Orthodox Church has a presence in a great many other countries largely because of emigration of Eastern Orthodox peoples, with large communities in the US, Canada and Australia.